Mira Mesa (Spanish for "Table View") is a community and neighborhood in the city of San Diego, California. The city-recognized Mira Mesa Community Plan Area is roughly bounded by Interstate 15 on the east, Interstate 805 on the west, the Los Peñasquitos Canyon on the north and Marine Corps Air Station Miramar on the south.[5][6] Most of the community plan area is referred to as Mira Mesa; the community plan area also includes the neighborhoods of Sorrento Valley and Sorrento Mesa.[6]

The Mira Mesa neighborhood, as defined by the San Diego Police Department's neighborhood map, is roughly bounded by Interstate 15 to the east, Camino Santa Fe to the west, the Los Peñasquitos Canyon to the north and Carroll Canyon to the south.[7]

Around the time of World War II the area now called Mira Mesa was used by the United States Army as a test area. Just west of U.S. Route 395 (now Interstate 15) was a Navy auxiliary landing field, known locally as Hourglass Field because the layout of the runways was a single piece of asphalt in the shape of an hourglass. The Navy also used the surrounding area as a bombing range.[citation needed]

Starting in 1969 there was a housing boom in the area that now extends from the I-15 freeway in the east to I-805 in the west and is approximately 10,500 acres (42 km2). This was one of the earliest areas of urban sprawl along the I-15 Corridor. Hourglass Field became the site of San Diego Miramar College and Hourglass Field Community Park. The area was built so quickly that it lacked schools, shopping centers, or other services for its thousands of residents. In 1971 Pete Wilson started his political career running for mayor with the slogan "No more Mira Mesas!" as a promise to stop quick, unplanned growth in San Diego.[citation needed]

Since its inception, Mira Mesa was largely influenced by the military located at the adjacent NAS Miramar. Mira Mesa was the northernmost "real community" of San Diego, and was separated from the rest of the city by NAS Miramar for many years. For nearly 30 years the Navy's Top Gun School was located here, and most of the pilots made their homes in Mira Mesa.[citation needed]

By the late 1990s, the Mira Mesa area had undergone extensive expansion to accommodate the thousands of new residents attracted by its proximity to major employers like UC San Diego, MCAS Miramar, Qualcomm, and dozens of biotech and pharmaceutical companies. Several commercial and industrial centers have been built within the Mira Mesa area.[citation needed]

A new development known as 3Roots will be going in to Sorrento Mesa in 2022. It will be situated just east on Camino Santa Fe where a rock quarry owned by Vulcan Materials currently exists. Along with 3Roots, a development known as the Stone Creek will be added to Mira Mesa, further increasing the population in 2025.[8]

Mira Mesa has a significant concentration of Asian-American residents. Their presence has added to the diverse shopping available in Mira Mesa, including grocery and shops offered mainly by Filipino and Vietnamese people.[citation needed]

The community has about 80,000 residents, including students, hi-tech employees, families, and single people. There are over 23,000 homes in the community, averaging 3.09 people per household. The median age is 32.4 years.[9]

The community has business and residential zoned areas, providing shopping and recreational opportunities as well as business buildings with technology facilities and office space. It offers a variety of ethnic cuisines and restaurants, as well as more traditional dining. There are a total of twelve parks; two are community parks and ten are neighborhood parks. There are also teen and senior centers, an ice arena, an aquatic complex, multiple shopping centers, and a state-of-the-art movie theater.[citation needed] 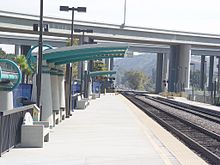 The nearby Sorrento Valley Station which serves the Mira Mesa area.

Public transportation is provided by the San Diego Transit and the Metropolitan Transit System, through buses and DART (Direct Access to Regional Transit) shuttles.[citation needed]

A train station serves Mira Mesa in Sorrento Valley and is served by the Coaster commuter train, of the North County transit district. The Coaster links Mira Mesa to Downtown San Diego, and north to coastal communities like Solana Beach and Oceanside.[citation needed] 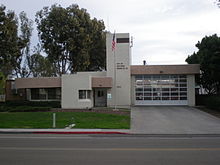 Mira Mesa is served by the Northeastern division of the San Diego Police Department. A police storefront located adjacent to the Epicentre along Mira Mesa Boulevard serves the local area including Scripps Ranch.[36]